A Day in the Life of a Science Communicator (SC)

The following article is a part of the ASPAC network`s blog train project on the theme "A day in the life of a science communicator". Stay tuned.

"Konnichiwa!"(Japanese for "good afternoon") No response. "Konnichiwa!" A blank look. I finally got it. The young lady standing in front of the cloud chamber and whose attention I am trying to get is not Japanese. That happens to me quite often. As a foreigner, I am still challenged to distinguish between Japanese visitors and visitors from other Asian countries. Sometimes clothes may serve as a hint but more often than not, the hint is rather unreliable.

"Hi, may I help you?" I switch to English. Her look changes but she still seems a little nervous. "I am just looking," she replies. "It`s fascinating, isn't it," I continue, "it is like a window into a different world." "Yeah, I guess. What is it anyway?" she asks. "It`s called background radiation. You can`t see it, but it`s everywhere. You can`t really hide. But actually you don`t have to. It`s more or less harmless."
"I see. I think I`ve heard something about it. So, where does it come from?"
"It comes from all the things that surround us. Actually, it mainly comes from a certain type of atoms that are unstable and when they decay, they give off small particles that we call radiation. And these unstable atoms are present in everything we see around us, even in our bodies."
"I see. So, looking at the trails here, I can see that there is more than one type of this radiation."
"Yes. As we understand it today, radiation is made of particles. Here you can see just three of them, alpha, beta, and muon. But there are other particles as well. Some of them are so difficult to observe that you have to build huge and complicated devices to learn something about them." "Like this one," I point to a 1:10 model of the Super-Kamiokande detector standing just a few meters from us. "This detector is made of a huge tank full of pure water and thousands of light detectors. The whole thing is buried 1000 meters under the ground where it sits hunting for the neutrino, a mysterious particle that is incredibly difficult to catch. It has even a nickname, the ghost particle."
As I can see that she got interested, we spend another 20 minutes talking about neutrinos; where they come from, their identity problems and why should people want to know more about them.

I enjoy talking with people. Even though it`s not always as easy as this time. Some people are shy and don`t want to talk and sometimes they don`t care much about science. Those are times when I feel that I am just a part of the museum`s display. It happened to me several times that after explaining what a certain display is about, visitors asked me how tall I am, where I am from and what brought me to Japan, but I don`t mind because I enjoy the interaction.

To work as a Science Communicator (SC) is an interesting experience. In my understanding, the goal of science communication is to show people that science is an interesting and valuable part of our culture and that knowing more about science may enrich our lives. Plus, as the name suggests, an important part of science communication is to connect with people.

There are many people visiting Miraikan every day, and each has different interests, motives and background. It is intriguing to observe visitor behavior, as some are very similar. So, it is possible to devise an approach strategy that may be applied to many of them.

Small kids are a good example. To approach a small kid, a good strategy is essential; especially when you are a blue-eyed foreigner almost 2 meters tall. If you approach them directly, their reaction tends to be like that of a small animal that suddenly ran into a big predator. First they freeze and then slowly increase the distance between you and them. Finally, when they think they are outside your reach, they turn around and run away. To avoid that, you have to make yourself as small as possible and approach them from an angle. Although it doesn`t work all the time, it increases the probability of your success from about 1% to 20%. Young couples are another special group. In most cases, it is not necessary or even desirable to talk to them since they barely register that they are in a science museum. It is enough to make sure that if they happen to ask you something, you don`t bore them with detailed answers. Most probably, learning about science is not on their "to do" list for that day anyway.

Of course, there are other groups as well. There are geeks, high school students, parents with small children, repeaters (visiting Miraikan repeatedly), foreigners, and many more. All these groups seek different kinds of information and need to be handled each in a particular manner. For example, telling a geek that a neutrino is an elementary particle would not satisfy him. He wants to know what is so special about it, where does it come from, why we study it and often asks about other elementary particles as well. A typical high school student, on the other hand, would write down everything I would tell him into his worksheet and then continue to another display.

SCs in Miraikan don`t just talk to people on the floor. An important part of their work is to design new activities and events for visitors that educate and entertain at the same time. Such activities include, for example, performing demonstrations, giving talks on modern scientific topics, doing workshops using our interactive exhibits, or organizing short talks delivered directly by scientists. 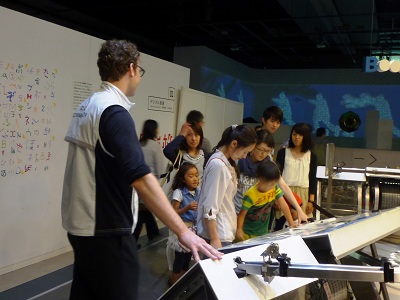 Besides being interesting, these events offer an excellent opportunity to learn more about people. I noticed, for example, that it is challenging to have Japanese visitors answer your questions in front of other people. They tend to be shy, quiet and reserved. They also automatically follow given rules and thank you a lot. Foreign visitors, on the other hand, are usually more active. They often shout the answers, add jokes and do things that are not part of a given event. Foreign visitors also tend to smile more and thank less than Japanese.

Let me illustrate the difference by describing the behavior of each group during one of our workshops. The goal of one workshop is to explain, in simple terms, how the Internet works. It takes place at our "Hands-on Model of the Internet" exhibit. During this workshop, after a short explanation, participants get an opportunity to use the exhibit and send a 3 character message to each other using white and black balls. Before the workshop begins, participants who arrive earlier have to wait for those who come later.

Now the difference. A typical Japanese participant would take a seat, wait for the workshop to begin, send three letters, thank the organizer and leave quietly. A typical foreign participant, on the other hand, would not take the seat before the workshop begins. Instead, he might start experimenting with the display, sometimes even send a few balls. When the sending message part comes, he would send 5 letters instead of 3 and then he would go and check whether the other group really received his message. When the workshop is over, he would be the last one to leave asking "what would happen if" questions.

Again, I don`t mind it at all, because for me, it is this variety that makes working in Miraikan so interesting.

And how about you? Let me know if you would like to work as a Science Communicator and why. 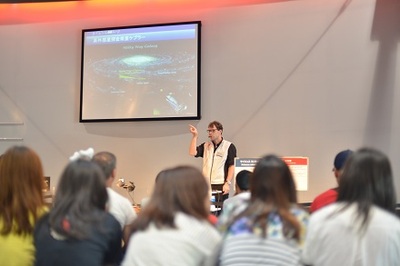 If you like the topic, make sure that you check the blog written by our colleagues Art Galapon and Pecier Decierdo from the Mind Museum in Philippines.

Born in Czech Republic. Already as a junior high school student I was interested in black holes, Big Bang theory and other topics that go beyond the tiny piece of rock we all share; the Earth. These interests then led me to a decision to study math and physics at university. A few years later, already as a researcher doing basic research, I noticed an interesting, symbiotic relationship between science and society and wanted to explore this connection further. I joined Miraikan in 2014.